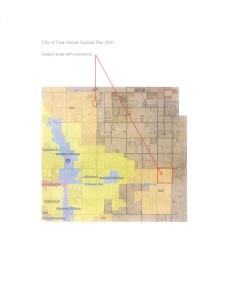 The City of Coolidge is provoking some discontent amongst its neighbors by brazenly claiming overlapping planning area, contrary to existing IGAs.

In the case of Eloy, the land in question is the south end of what was once the City of Mesa water farm, now owned by affiliates of Farm Services International, fronted by Jackob Andersen of Scottsdale.

Since the bulk of the 10,000+ac property is in Coolidge, the new owners preferred the entire property to be in that jurisdiction for ease of planning, leading to a letter of protest from the Eloy City Council, which was shortly withdrawn.

The Casa Grande incident, however, is a little less clear-cut;  view the letter of protest and the original IGA here.